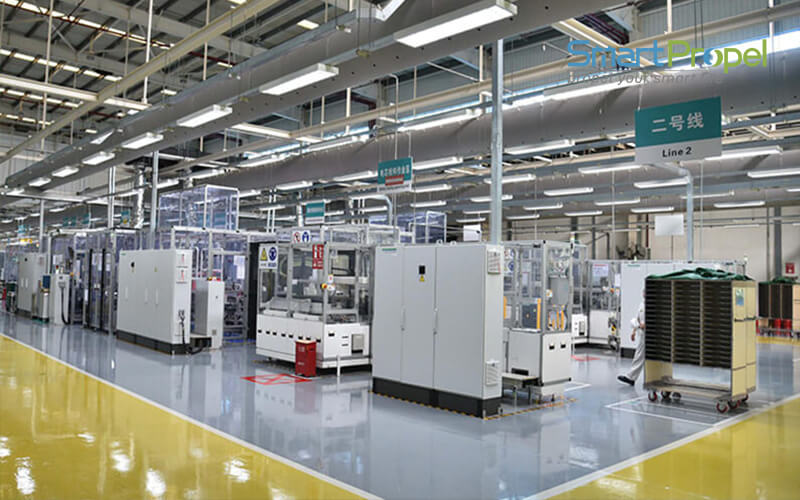 It isn’t easy to find a place in today’s world where people aren’t reliant on technology. Because most of the electronics we use operate on batteries, they’ve become a necessity in our daily lives! Lithium-ion batteries are currently the most widely used batteries in electronics, power backups, smartphones, solar energy systems, laptops, and other applications. It was first introduced in the late 1980s and early 1990s, and it drastically changed the world of portable electronics. Hazardous compounds were used in previous batteries, such as nickel-cadmium and lead-acid batteries. Battery firms have recently converted to lithium-ion batteries due to mounting concerns, and the industry continues to thrive around the clock. Here are some of the top lithium ion battery manufacturers.

Tesla is one of the most well-known clean energy companies in the United States. Electric cars, solar products, battery energy storage, and associated services and products are all part of the company’s product line. It is one of the world’s top five battery manufacturers. The Tesla-Panasonic gigafactory in the United States is the world’s largest lithium-ion production facility. Tesla has consistently placed itself at the pinnacles of automotive excellence with the launch of its Model S and Model X. All of this is due to the long-lasting batteries that come standard in their vehicles.

CATL is a global leader in new energy revolutionary technologies, with headquarters in China. The company is dedicated to offering outstanding services and solutions for new energy applications worldwide. This world leader in lithium-ion battery designing and manufacturing is dedicated to offering superior battery solutions. The corporation intends to open mega factories to meet current worldwide demand.

This Korean conglomerate is the world’s largest producer of lithium-ion batteries in terms of capacity. Since its founding in 1947, it has consistently grown through constant difficulties and innovation, earning it the title of an industry expert in Lithium-ion batteries. LG Chem has transformed fantasies into reality and enriched our lives for 70 years.

This Japanese behemoth is the world’s fourth-largest li-ion battery maker. It is also the number one company in Japan, focusing on eco-solutions, linked solutions, industrial and automotive systems, etc. Panasonic’s incursion into the lithium-ion world commenced with the advancement of battery-powered vehicles. It is presently providing batteries for Tesla, an automotive and tech juggernaut whose automobiles are known for their performance and efficiency worldwide.

A Chinese company that sells lithium-ion battery technology to the automotive industry has joined the list. BYD has created PV+Storage, a novel business model that removes standard photovoltaic power generation constraints and addresses a wide range of market needs. BYD produces electric vehicles and lithium-ion batteries. BYD is among the few automobile manufacturers to manufacture its batteries. Lithium batteries from BYD are among the most adaptable on the market.

This child company of the Samsung Electronics group is committed to proffering lithium-ion technology development and research. It currently manufactures energy storage systems, lithium-ion batteries, and solar energy panels, among many other products. This company has gained a foothold in the most critical markets, including Malaysia, Germany, and the US.

Toshiba dedicates significant resources to researching and developing lithium technology. In addition to lithium-ion batteries, the company manufactures and sells storage solutions related to the automotive industries and telecommunications industries.

For a long time, Johnson Controls has been among the world’s leading battery makers. Since 1887, this company has been in the battery manufacturing business. Although they continue to manufacture lithium-ion batteries, Brookfield Business Partners has acquired their car battery business. Before selling their automotive division, they developed batteries and battery systems for vehicles like the Ford Fusion. Johnson Controls batteries have a solid reputation for being exceedingly safe.

Humanity has never looked back since learning how to create a power cell that can generate electricity. Because of their outstanding advantages, lithium-ion batteries are employed in a wide range of electronic gadgets worldwide. The companies named above are top lithium-ion battery manufacturers list with their top-notch technology.

The Demon In AI And Losing Your Job To Robots

Saving Your Job: Artificial Intelligence Cannot Touch You If You Are Unpredictable

Asian Data Science is the online resource for data science in Asia that discusses topics ranging from strategy and analytics, to reporting and visualization, and to organizational transformation.

What Are Stainless Steel Coils Used For?

The Demon In AI And Losing Your Job To Robots